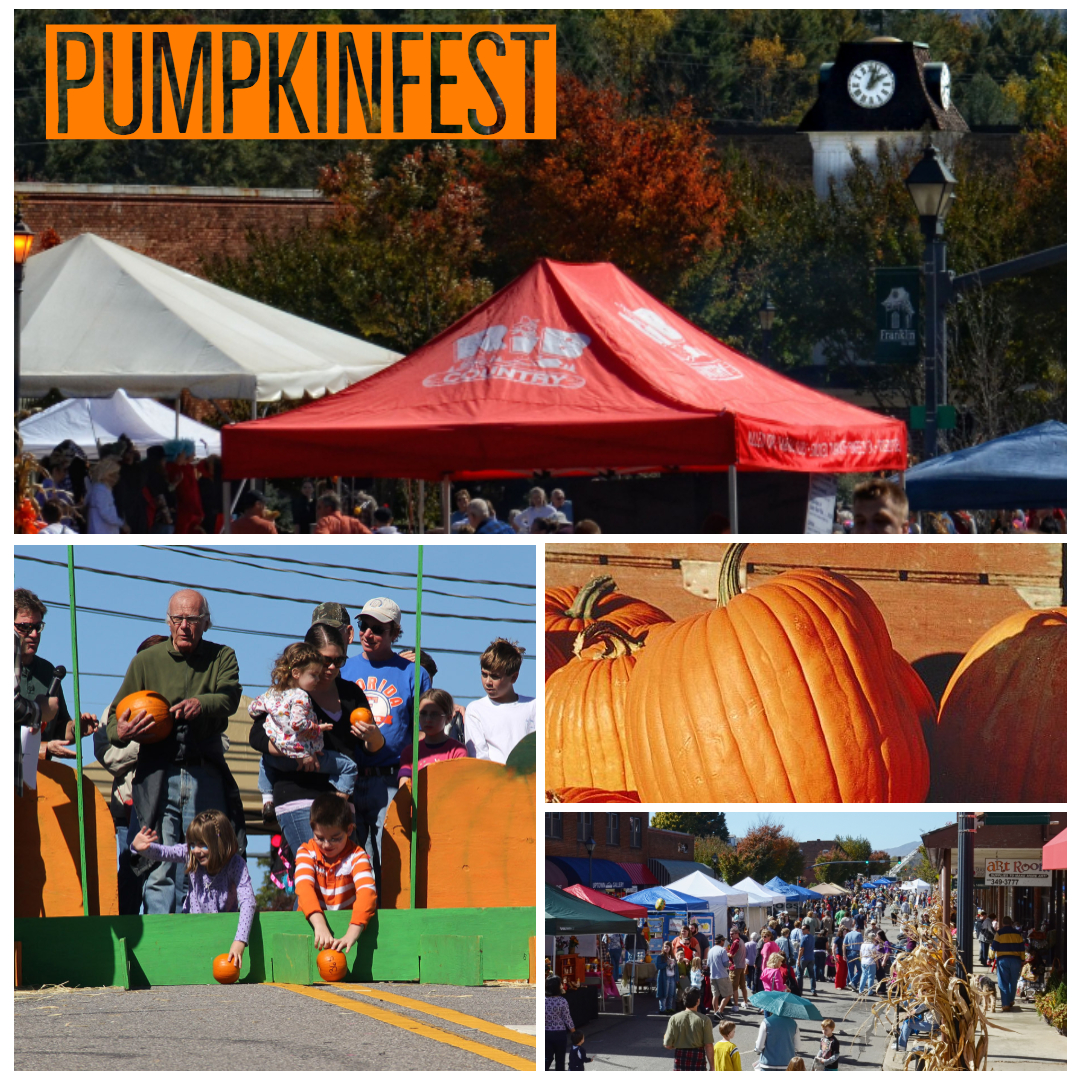 Get Ready for PumpkinFest 2018

You know Fall is officially rolling in when it’s time for PumpkinFest in Franklin, North Carolina! Get ready for the 22nd year of the Pumpkin Roll, festival fun, costume contests, and a weekend the whole family will remember for years to come.

So what kinds of autumn activities can you expect Saturday, October 20th?

All Things Pumpkin: The World-Famous Pumpkin Roll and more!

That’s right—Franklin is home to the World-Famous Pumpkin Roll! Gather ‘round as a crowd sends bouncing pumpkins down Phillips Street downtown, and try your hand at rolling the furthest for a grand prize of $100! Last year, the winning pumpkin went on a whopping 985-ft. adventure. Can you beat that?

Bring your pumpkin (or purchase one downtown) and sign up for the World-Famous Pumpkin Roll between 9am and 1pm. The good times officially start rolling at 10:30am and don’t stop until 2:30pm.

But that’s not all the pumpkin fun to be had! There’s also a pumpkin decorating and carving contest for any artists who’d like to celebrate the season, and of course, you can’t have a fall festival without a pumpkin pie eating contest!

Off the Beaten Trail: The Chris Clark Bicycle Stunt Show

Whoa, bike stunts? Yep, we’ve got that, too! Professional stunt cyclist Chris Clark is taking Pumpkinfest by storm one 30-minute show at a time. Watch the breathtaking show as Clark tackles custom-built ramps and hairy obstacles with ease.

We’re also thrilled to be partnering with Clark to give away a brand-new Schwinn bike at the end of the day! Make sure to stop by the show and register to win!

PumpkinFest is great for the kiddos, too! Two bouncy-house Kids Zones will be set up downtown for some high-flying fun while you parents take a moment to enjoy some ice cream, blooming onions, or funnel cake. The kids zones will be open from 9am to 4pm, so make sure to stop by!

And don’t forget to saddle up for a FREE pony ride before the day is done! Hop on up and take a stroll with Little Rascal Pony Rides from 9am to the end of the day.

Fun for All Ages: Costume Contest and Parade

Last but not least, what would PumpkinFest be without a Halloweeny costume contest? Anyone of any age can sign up and hop in for our parade at 1:15pm—the contests will begin directly afterwards! We can’t wait to see what incredible costumes people come up with this year.

We’re thrilled to have you for the 22nd Annual PumpkinFest this year! As you wander from event to event, don’t miss out on more than 80 vendors including mountain arts & crafts along with great food! There is always live entertainment including roving street performers.

More information can be obtained by calling 828-524-2516 or drop us an email at pumpkinfest@franklinnc.com. You can also follow PumpkinFest on Facebook to keep posted on the latest information!

One Christmas Night In Memphis